Vikings and the Discovery of America

Icelandic seafarers discovered America around the year 1000 AD, when sailing on open Viking ships. They conquered the waves of the Atlantic by primitive means of navigating, sailing mostly by the sun and stars and the flight of seabirds. The story surrounding this is in part a family drama and begins with Eiríkur Rauði (Eric-the-Red), a troublesome man who was exiled from both Iceland and Norway, before settling in Greenland in the year 985 AD. Later that year, an Icelandic merchant named Bjarni Herjólfsson was sailing for Greenland, but got blown off-course and reported seeing land to the west.

Little interest was shown in his discovery until the year 1000, when Leifur Heppni (Leifur-the-Lucky), the son of Eiríkur Rauði, went to explore the land that Bjarni had sighted. He discovered an area he named Vínland, “a land of mild climate, self-sown wheat and grapes” and consequently, Leifur was the first European to set foot on the continent of North America. His brother, Þorsteinn, attempted to go there with his wife Guðríður Þorbjarnadóttir without succeeding, but after Þorsteinns’ death, Guðríður and her new husband, Þorfinnur Karlsefni returned to Vínland to form a settlement. Their son Snorri was the first European that was born in America. Initially, the Vikings conducted peaceful trade with the native American tribes, but eventually conflict broke out. This drove the Icelanders back to Greenland and successful Viking voyages to Vínland are not reported after that. However, in the year 1477, a young Italian sailor visited Iceland. Scholars believe he heard rumours of Vínland, that gave him a daring idea that he wanted to pursue. His name was Christopher Columbus, and as they say, the rest is history. 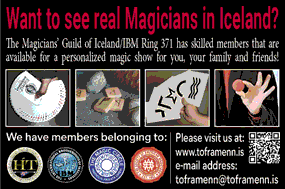